While I await news on the next Kamen Rider, I decided to make a list of my top ten favorite suits from the Kamen Rider series, excluding the final forms. That is for another time. Also: only one suit per franchise. Sadly this meant certain ones had to get cut out from the list. 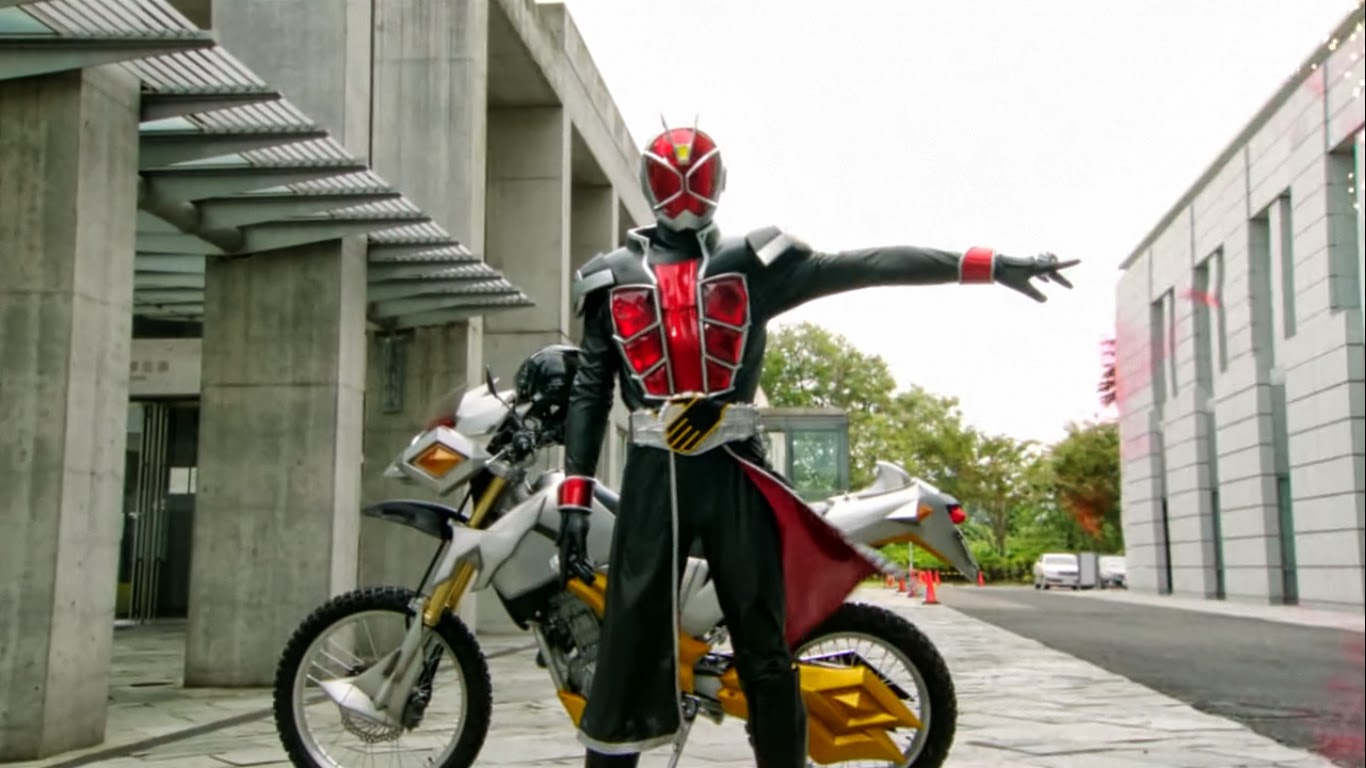 One of the most elgantly designed main character designs of the show. Seriously, it’s all in that color combo of red and black, and that cloak that Bandai keeps using in its later series of Ex-Aid. The face is also unique: keeping the sort of insect motif while also showing his ring gimmick because of his gemstone like appearance.

Gaim’s suit designs were pretty good across the board (except for Kiwi Arms and the abysmal Pine Arms) and Zangetsu is certainly no exception. His upgraded “Melon Energy” form looks good too, it’s his sleeker and refined default form that really does it to me. That pure white and toned down green just fit so well. Plus, I love his “weapon”; a shield that’s known as the Melon Defender. It just makes him look that much more like a really cool ancient samurai.

The main villain from the “Paradise Lost” Faiz movie, we have an interesting design in the form of Orga. It’s already interesting in that the villain of this movie is the Horse Orphenoch from the show, but the design itself is unique among Faiz suits. The Faiz suits look amazing: technological and lighter on the armor. This one is heavier on the armor and gives off an almost regal appearance: like THIS is the main villain no questions asked. He also looks almost ancient in a way: the head crest is mostly to blame for that. Once again I have to mention: that amazing cloak. Seriously, more Rider suits need that cloak.

I’m angry that they ruined this form later by giving it the absolute garbage looking Meteor Storm form. This suit had literally nothing wrong with it! The nice star pattern on his suit, the vibrant blue on his mask and shoulderpad, even the magenta eyes really fit well together to make a beautifully done suit. Even the weapon on his right arm, the Meteor Galaxy, is pretty cool, albeit really ridiculously silly when asked to describe. You punch with holographic planets. Both cool and stupid. Perfect for a show like Fourze. This one only barely beat out the other Wizard suits (which look amazing aside from Beast Hyper and the Mages), and that’s because of two things. First reason being, the colors. While I like black and red more, the colors on this suit just blend so well together, making this almost holy looking vibe: making it all the more frightening considering he’s the villain. Plus: the small details of the face. While Wizard has a more refined cut of diamond on his face, Wiseman has a much more crude cut, giving off malice that much more. Also: he’s got a combo of both cloak and a hood: extra points for that. 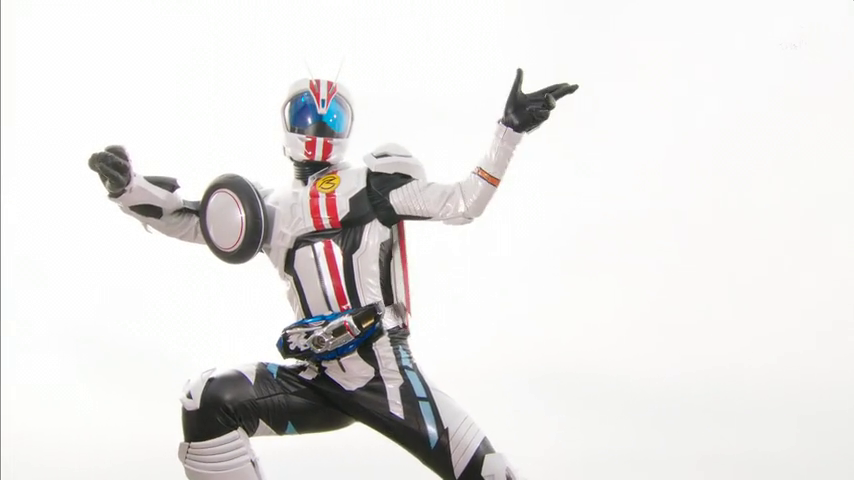 Considering Drive’s vehicles motif, what better secondary rider to a big hulking car and truck based rider, than a sleek refined motorcycle? Seriously, a bright white, red stripes, and long flowing scarf (yes, that red and white striped thing laying across the back there, is a scard) make him a great combo of new and old Rider designs. The big blue eyes are a very nice color offset. Plus the “motor bike helmet” cana ctually be lifted off, revealing that the eyes are one big pair of motorcycle goggles. That’s a very cute touch.

You’re noticing a pattern, aren’t you? Like the fact I love the sleeker designed riders? Well, you’re right. For some reason those riders always appealed to me. IXA is no exception. This time giving off a properly holy vibe, fitting considering not only is the Rider a secondary rider but also if I remmeber correctly, a man of God. I could be wrong though, but still. An amazing looking suit, giving off a highly technological vibe. The golds, whites, and blues of the suit blend well together to make a really good suit, and they blend together WAY better than his Rising form.

OOO was a very mixed bag to some: while the complete combos looked amazing and simple, the mixed or incomplete combos were very awkward to many as well. But suit designs like this more than make up for it: different shades of red and black are all you need. It had a huge effect on the story as well, and had an honestly stunning theme song when brought out. Seriously, look it up. Every second this suit is on screen is eye candy. I’ve got nothing more to say: it’s just fantastic.

I apologize for the bad quality of the photo: but I have a good reason for that. Shortly after the filming of Agito, the Gills sit was destroyed by water damage. Maybe making the suit out of a material that didn’t like water and filming TONS of water fight scenes did not help much. Even outside the show, Gills had bad luck. Anyway, being one of the first of the secondary riders along with G3, Gills really stands out from the basic designs of years gone by, looking more evolved and advanced and overall vicious. Those huge horns, and the fact his mouth actually opens up so he can yell make him an utter spectacle to behold during his brutal fight scenes.

I’ll just call him Zombie Genm for short. And no, not level 10 (though he does start that way), level X. AS IN THE VARIABLE. Seriously, what a monstrous design: truly threatening from the detailed spine on his back, to the blood red eye and cracked health bar. This guy was the biggest thorn in the main riders’ side for a long time: seriously, 10 episodes in his base form and another 13 for this form. While he reformed eventually, this thing was monstrous, strong, and actually frightening. Seriously, give the suit actor and main actor for the character credit for making Genm the insane madman he is, and for a seriously unforgettable voice and character. My favorite movie exclusive rider, and one of my favorite Kamen Rider characters. Beyond tragic, and a beyond amazing suit design. It’s as basic as basic can get: a msotly black uniform with a silver skull pattern on the face and a skeleton pattern on some of his chest. A tattered scarf that represents an age ending: and passing it down to the new generation. Something about this suit always makes me love it, despite it ahving the absolute most basic design. I can’t put it into words. What I CAN put into words is my love for THIS suit. With a grandiose design, especially compared to other Gaim suits, and the best reveal in Kamen Rider history, taking on an entire ARMY of troops SOLO. ON A TOWER THAT STRETCHES ABOVE THE CITY. Seriously, it’s no wonder I love the suit so much: it mixes the fruit theme, the Sengoku era theme, and the modern dance era theme of the show in a perfectly blended, no pulp needed, suit. I’d lvoe to see Kamen Rider top this, though I know perfectly well they won’t.